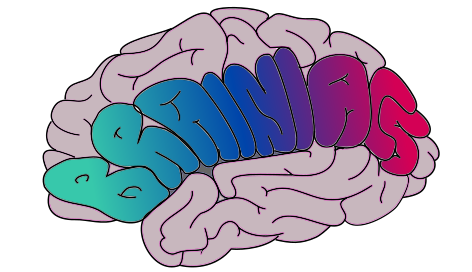 To apply the theoretical models for brain tissue behavior to relevant clinical problems, we solve the governing equations numerically using the open source finite element library deal.ii. Firstly, we use the computational models to carefully calibrate the model parameters through an inverse parameter identification scheme. This is especially important as, for extremely soft materials such as brain tissue, it is virtually impossible to achieve a homogeneous deformation state during mechanical loading. Once calibrated and validated, the computational tools can be used to tackle scientific issues on the borderline between medicine, biology and mechanics:

The role of mechanics during brain development

The characteristically folded surface morphology is a classical hallmark of the mammalian brain. During development, the initially smooth surface evolves into an elaborately convoluted pattern, which closely correlates with brain function and serves as a clinical indicator for physiological and pathological conditions. Recent evidence confirms that physical forces play an important role in pattern selection. Through computational analyses we explore the key regulators of brain folding, including cortical thickness, brain geometry, local tissue stiffness, cell division and cell migration. The mechanical model can provide important insights into the underlying mechanisms of brain malformations such as focal cortical dysplasias (FCDs) associated with epilepsy. Combining physics and biology holds promise to further advance our early diagnostics of cortical malformations, and to improve treatment of neurodevelopmental disorders such as epilepsy, autism, and schizophrenia.